With years of higher education un 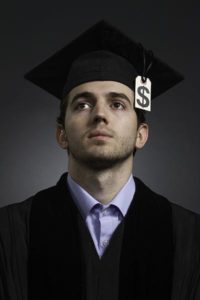 der your belt and a great job, one would think you’ve got it made financially (Or at least you are on the road to financial freedom). You’ll never need to know anything about bankruptcy, right? Bankruptcy is for the unemployed and uneducated. Right?

While it sounds like common sense to say that someone with a college education and a well-paying position won’t have money problems bad enough to make them consider bankruptcy protection, it’s just not true. Back in 2011, the Institute for Financial Literacy put out a study that revealed “college education doesn’t appear to ward off bankruptcy as the rate of degree holders filing bankruptcy increased by 20 percent” between 2006 and 2011. Further, that report said 66 percent of people filing made more than $60,000 a year.

Now, a few years later, even though the U.S. economy has bounced back a bit, the Consumer Financial Protection Bureau says college grads have amassed around $1.2 trillion in outstanding federal student debt. In fact, the average undergraduate student in 2012 signed on the dotted line for about $27 thousand in student loans, according to a U.S. News survey.

At the same time, by the way, the unemployment rate for recently graduated college students is astronomically high. So, whether your financial troubles are due to high debt with no job, high debt with a good job but overextended spending habits, or somewhere in between, no one is immune from financial crisis.

Likewise, most people can find some solace in the protection filing for bankruptcy provides. Speak to an experienced bankruptcy attorney about your situation. Perhaps credits counseling is in order at the present time. Or, if the problems have gone too far, you can get the advice you need to file for personal bankruptcy protection and get back on the road to financial health. It’s never too late to start over.

Contact the Law Office of Joel R. Spivack. For more than 20 years, he has been helping people in Cherry Hill, like you, file bankruptcy and get the help they need to get out of debt and back to climbing the ladder of success.